Hope everyone stays safe during this Hurricane!!

I was so moved seeing the Alexander McQueen show at the Metropolitan Museum yesterday.  His imagination, his vision, inventing and re-inventing, his spirit, his ability to take risks, to push an idea, to create such drama and fantasy coupled with superb craftsmanship.  I could go on and on.  When you stand there amongst his world that he created in such a short time, you are overwhelmed with how much he gave of himself to the project at hand.  He didn't compromise.  He went all the way.  Thank you, Mr. McQueen, I am so inspired and fueled by what you left us!

Of course I loved all of the accessories.  The shoes, the head pieces, the jewelry...
As I have always been fascinated by the spine, this was worn over the clothing and the tail moved.  Click to read and see more of the  spine corset 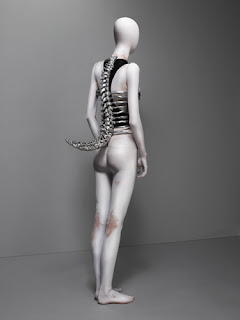 What a great performance piece! Read about this model being spray painted by robots on stage 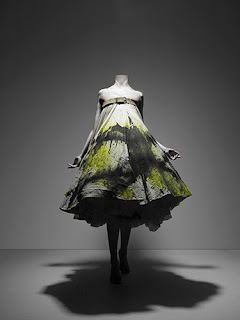 He is quoted often of his influence from nature.  ..."I'm inspired by a feather but also its color, its graphics, its weightlessness and its engineering..."
This dress of duck feathers is so fantastic and has the details and hints to the beauty and subtleties of the body.
Romantic and macabre 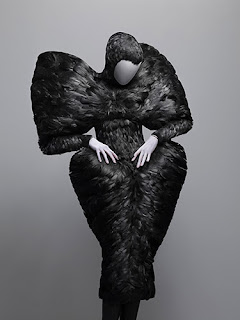 Sarah Burton the creative director of the Alexander McQueen brand is quoted  saying,
"Often, Lee would tell me to read books, to look at artists, or to listen to a piece of music.  That was the thing about Lee, his mind was so active.  Every season, Lee wasn't just designing clothes.  He really was an artist.  He had to better himself, and it was just relentless.  But, in saying that, he loved doing it so much.  I'd never see him happier than when he was here, touching things, making things."

A must see, SAVAGE BEAUTY, it closes this Sunday  http://blog.metmuseum.org/alexandermcqueen/

Dina Varano
I am inspired by nature. I want to show the mark of my hand in each piece and achieve a rhythm of grace and movement. I make my jewelry to inspire and welcome play with the wearer.

Shop Local! Visit Dina Varano in the village of Chester

Great photos from such a fun event! 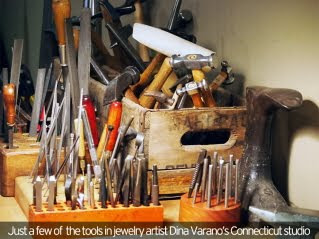 Susan Lomuto is on a journey apprenticing with artists getting a close look at thier life in studio. Click photo to read more